Which surveys answer how large a proportion of the whole population blogs? 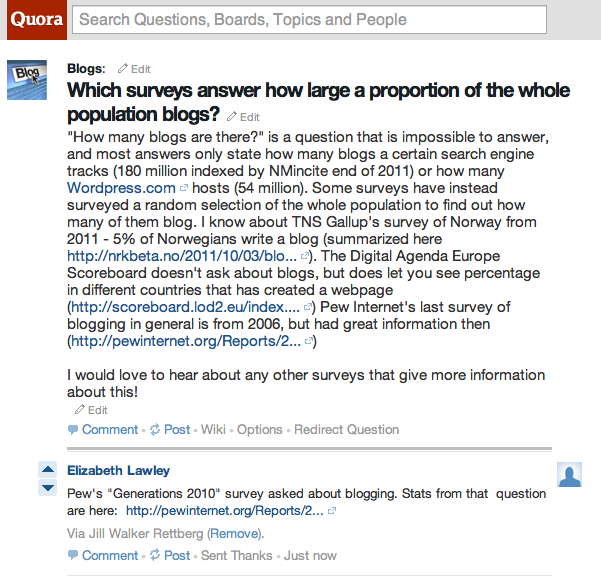 Maybe I’m starting to get the point of Quora. I’ve been a member there for ages, of course, but I just followed a few topics and people and forgot about it. It looks as though most of my friends who I follow on Quora have done the same thing – and since I’ve not been using it in any focused way, most of the questions I see are silly, like “What will be the top tech trends in 2012?” and “What’s it like to be a God?” Oh, I suppose they’re interesting questions in a way but I have so many other ways to waste my time on the internet, you know?

But to finish updating the “history of blogging” I wanted some kind of estimate of how many blogs there are, which is of course an impossible question – but typing that into google led me to several Quora questions. I had a more specific question about surveys that show bloggers as a proportion of the whole population rather than trying to count the number of blogs, so I started entering it, and realized that there’s this whole system of credits on Quora where I can spend credits to ask specific people to answer my question. So that’s how people get celebrities to answer! I wonder if Quora could get me better answers to this question than Facebook or Twitter or this blog?

Maybe you know the answer to my question? To humour this newcomer to Quora, maybe  you would answer it on Quora? I asked Cameron Marlow and Dave Sifry to answer, mostly because they founded early blog indexes (Blogdex and Technorati) and so I’d been thinking about them as I’ve worked on the blogging history part of my book. I would have asked Amanda Lenhart, since she wrote the Pew survey from 2006, but she’s not on Quora it seems. And of course I asked Liz Lawley since she would likely know. I didn’t even have to spend any credits to ask her, because she’s my friend.

Do you use Quora? Do you find it useful?

2 thoughts on “Which surveys answer how large a proportion of the whole population blogs?”