I spent two days last week at the European Journal of Communication Symposium 2009 – a fabulous little workshop that was held in beautiful Padua, half an hour away from Venice. Every couple of years the journal’s editors invite a group of scholars to a symposium on a specific topic. Everyone contributes a paper, much discussion and debate follows, and later that year, a special issue of the journal is published based on the papers given at the symposium. This year’s questions circle around the changes in communication as the audience become creators. Half of the participants were well-established nestors in the field of communications studies, discussing how old paradigms hold up or must adapt to new media, and the other half of us were something closer to digital natives discussing the specifics of new media communication. 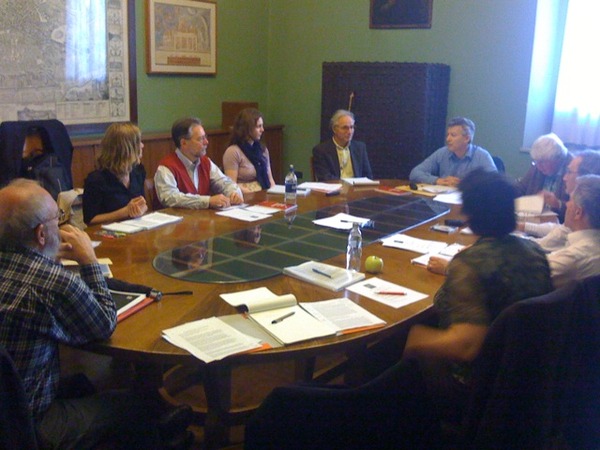 The surroundings were splendid – Padua is one of the world’s oldest universities, and the seminar room was glorious, as you can see from Mark Deuze‘s photo above (thanks Mark for documenting us!) Three hours in Venice en route to the seminar was also a fabulous experience – all the better for meeting there my Norwegian colleague Gunn Enli from Oslo (whose paper is about audience voting in shows like the Eurovision Song Contest and Dance with the Stars) and the intriguing and energetic EJC editor wrote about some examples here on my blog a while ago. I need to finish the paper by May 20, before I go to the E-Poetry conference in Barcelona, so I’ll be working hard on it over the next few weeks – and intend to blog about it as I go.

Right now, I want to finish reading JosÈ van Dijck’s Mediated Memories in the Digital Age and skim through a paper I just found – On the Design of Digital Heirlooms by David Kirk and Richard Banks. And think about the ways in which I want to organise the paper and my examples.

It was really inspiring to be invited to this workshop – it got me thinking again after being on leave, and I’m relishing the excitement of researching and writing about new ideas. And it was an honour to be invited to such an exclusive gathering. And now to work!