a turn from computational to ecological digital poetry 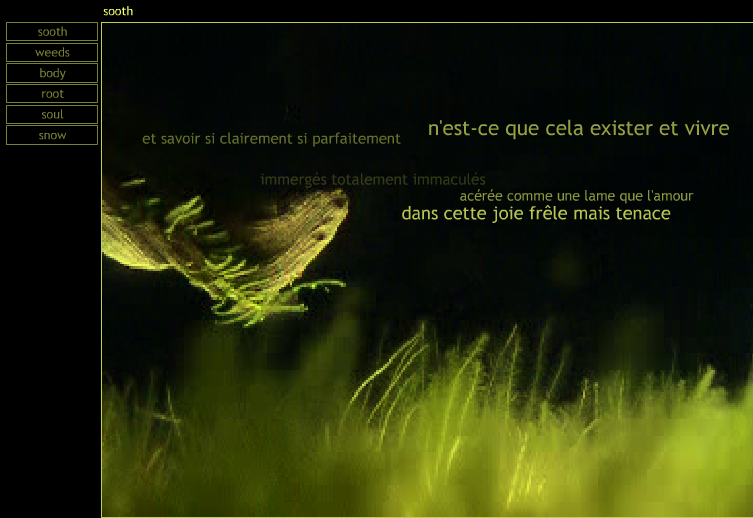 Rita Raley’s giving this morning’s keynote at Digital Poetics and the Present, an ELMCIP seminar in Amsterdam, and in a larger discussion titled “Living Letterforms: The Ecological Turn in Contemporary Digital Poetics”, she’s offering a reading of David Jhave Johnston‘s Sooth, a cycle of six video poems, where the reader’s clicks draw out lines of poems superimposed on video that drifts around a natural scene. She argues that Sooth is emblematic of a recent shift in digital poetry towards a concern with ecology, where non-human actors are animate and lively. She describes this as a step away from the intense focus on the code, the technical and computational processes that dominated digital poetry at the start of the last decade. The lyrical subject valorises his lover in each of these poems, and yet the pieces are grounded in the material world. The subject seeks a connection not only with his lover, but with the natural world. Jhave’s project, Rita Raley argues is to create digital poems that respond as though they are animate, alive. This isn’t about artificial intelligence. It’s not simply about emulating life but about prompting (in us, the readers) an embodied recognition of life.

We’ve added all the papers from the seminar to its entry in the ELMCIP Knowledge Base of Electronic Literature, and will be adding references and documentation after the seminar (slides and hopefully video).