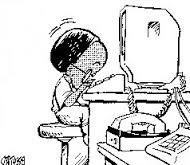 One advantage of being on sabbatical is that you learn things and meet people you wouldn’t have if you’d stayed home. This week I was lucky enough to go to a talk by Duke professor Mark Anthony Neal at the African American Studies Department at UIC. This is a part of American culture we don’t learn enough about in Norway, and I’ll certainly be showing many of Neal’s examples to my students when I get home. (Probably they’ll get more of the hiphop references than I do.) Neal began by showing us a picture that looked ever-so-familiar but that I had forgotten: this is Oliver Wendall Jones, the computer nerd from Bloom County, a cartoon I loved in high school – back in the late eighties. “Oliver Wendall Jones is the black patron saint of Twitter,” Neal said, and continued by tearing apart that piece in Slate a while back about “How Black People Use Twitter“. “The author might as well have been referring to dogs,” Neal said. What’s really going on, he explained, is that African Americans use Twitter as a global instant messenger. It’s kind of like fictive kin, where you “you acknowledge other black folks wherever they are in the world even if you don’t know them.” The birth of black social media in the US was  actually on plantations, Neal said. African Americans have a long history of communication with a broad public in ways that would not be seen as subversive. For instance, singing on the plantation about “go down Moses” sounds innocuous but might actually directly instruct everyone to meet after work at a nearby place known as “Moses”. This is a culture that knows how to obscure the publicness of their conversation. This creates a community, a “Black code” or “Black imaginary”, and Neal showed a quote from Elizabeth Alexander on the screen: “Tapping into this Black imaginary helps us envision what we are not meant to envision: complex Black selves, real and enactable Black power…”

Other early forms of social media used by African Americans includes the mimeograph – which is what the Greensboro 4 actually used – and the mixtape, which was an important way of spreading Black music, which was not played on the radio most places as late as in the 1980s and 90s. The next part of the talk was devoted to a series of examples of how African Americans have used social media for community building and political purposes.

Phillip Agnew runs the civil rights group Dream Defenders and was scheduled to speak for two minutes at the 50th anniversary of the March on Washington, but apparently other people overspoke their allotted time and his two minutes were cut. So Agnew set up his camera and gave his speech. The speech itself is moving, but the key point for Neal is Agnew’s initial request to his listeners: record YOUR two minutes, share it. Agnew crowdsources the revolution.

Neal almost apologizes for the next example, because it certainly isn’t grassroots activism: it’s a video of Obama brushing off Hillary Clinton’s attacks during his first presidential campaign. But this, Neal says, is the single moment that won Obama the hip hop vote: he makes an unspoken reference to Jay-Z’s “Dirt off my Shoulder” by brushing his shoulder to show how he’s not affected by negative publicity. This is an example of Obama using “Black code”.

Neal then moved on to showing how community is developed through social media, although there may not be clear victories. He showed us a really interesting video where 1hood media (I think, can’t find the source) made a short, fast-cut visual and spoken documentary arguing that Troy Davis was innocent, giving new words to what Neal (a hiphop scholar) called the quintessential mourning song of hiphop culture: “They Reminisce Over You (T.R.O.Y)“. Neal calls the social media activity around Troy Davis’ planned execution “this generation’s first vigil”. Davis was eventually executed, but there was a 2-3 hour stay of execution. In a way this fight was a failure since Davis was executed – but the effect of was that when Trayvon Martin was killed, there was a context to build protest that got Zimmerman to trial, which was the real victory. Every victory comes after many defeats.

The digital divide isn’t that black folks don’t have access, it’s that access is different, Neal said. More than 50% of blacks who access the internet do so on their mobile – far more than whites. For many African Americans, their only internet connection is through a handheld device. It’s difficult to fill out a job application on your cellphone – we need broadband in the ‘hood.

Neal’s talk ended with an opening up towards less obviously productive forms of engagement in social media, like #rachet, which is “this alternative black twitter” that is “a challenge to black respectability”. A young woman in the audience asked Neal what he thought of worldstarhiphop.com, a site that as far as I can glean is clearly “rachet”. Neal states unequivocally that the site is “incredibly dehumanizing of the black people.” He wants it gone. The student countered, “Well, it’s black expression.” Neal had a quick answer: “It leads people to say “But if they do it to themselves, why should we be upset other people are doing it to them? Is it middle class black folks mocking lower class black folks?” Neal’s not too worried about adults viewing it, but says that a good part of the audience is young children, pre-teens, and that the idea the site gives them of black culture is incredibly harmful.

Mark Anthony Neal has of course written several books, but also writes for The Huffington Post, is on Twitter as @newblackman (also the title of one of his books) and runs a weekly podcast titled Left of Black. So plenty of ways to follow his work.

Previous Post
An online selfie course for academics
Next Post
Celebrities’ self-presentation (notes on a paper by David P. Marshall)