Did you look at Justin Hall’s blog lately? Justin’s been publishing his life online for eleven years, with an honesty (well, an apparent honesty, I don’t know him apart from his website so can’t verify anything, but it’s certainly truthful in the way that literature is truthful) and sustainability that’s awesome. 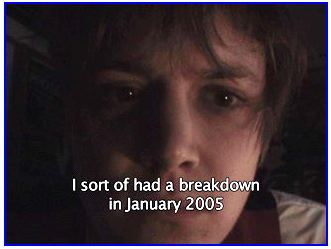 Right now his usual site has been replaced by a ten minute video, where he cries into the camera asking how to combine his deep need to make media, write, publish, share with his need to have meaningful relationships and love. If the front page of his site is different when you go to look, here’s a direct link to the video.

Blogging, writing his life online, feeds some of the same needs as religion, Justin says:

What if a deeply connective personal activity you do that’s like religion that you practice with yourself, that’s a dialogue with the divine turns out to drive people away from you?

“There’s always someone there.” But it’s not working. “Because I can’t write about people because they don’t want to be there and I have nothing to write about (..) and I publish my life on the fucking internet and it doesn’t make people want to be with me, it makes people not trust me and I don’t know what the fuck to do about it.”

It is a form of art, this media-making so many of us have come to feel is part of life. I don’t want Justin the real person to be in pain, of course not, but a stop and a video like this is a strong narrative move and a cautionary note as well.

I’ve started reading Viviane Serfaty’s The Mirror and the Veil: An Overview of American Online Diaries and Blogs, which is a literary rather than an ethnographical or quantitative approach to diaries online. She notes the twofold nature of the screen, which is both a veil and a mirror:

The literal function of a screen is precisely to conceal and as a result of this perception, all kinds of highly controversial discourses are freely displayed on the Net. The screen seemingly offers a protection against the gaze of others, enabling each diary writer to disclose intimate thoughts and deeds, thus attempting to achieve transparency and braking the taboo of opacity regulating social relationships. (13)

Serfaty quotes Jean Starobinski, whom in 1971, writing of Jean-Jacques Rousseau, wrote what could as well be a description of bloggers and readers: “Making oneself invisible means one no longer is a mere transparency anyone can see thought, but that one has turned into a gaze no taboo can stop.” (Starobinski 1971: 302) 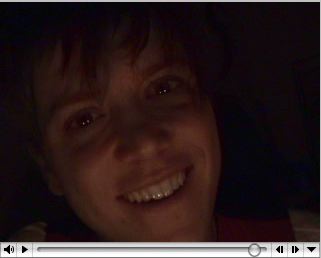 Look at Justin’s gaze, fixing the camera, fixing you, fixing himself. In the final moments, after the sobbing yet self-aware phonecall with a friend, right at the end of the video he’s wiped away the tears and whispers into the camera:

You’re crazy. Is he talking to himself, or to you? To the mirror, or through the veil?

“Without the prohibition of intimate disclosure, there would be no transgression. The prohibition therefore is constitutive of the meaning of self-revelation on the Internet.” (Serfaty 2004: 13-14)