Teaching BASIC in the 21st century 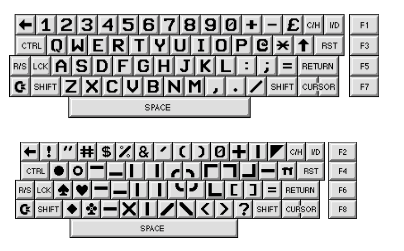 If you bought a home computer in the 1980s, chances are you learnt a little bit of BASIC programming. The command line interface meant that the difference between starting to play a game and writing a short program was not as big as today, and most of the Commodore 64 User’s Manual was dedicated to explaining how to program your own game or program in BASIC. So for the last few years, our first year Computing Technology: History, Theory and Practice students have had a two hour workshop where they learn to program in BASIC. Here are my notes from the first time I taught this workshop, and the post you’re reading right now gives you some updated ideas.

This is a great class to teach. It’s a simple introduction to a programming language that is of no practical value today, but that was immensely important to a generation of early home computers. The historical value is clear: we use Commodore 64 emulators so get a feel for what computers were really like in the 1980s. It teaches some simple concepts that are important in other programming languages: what is a variable? How do computers follow instructions? Why are programming languages different from each other? And it lets today’s students actually experience working with a command line interface, where you can’t use the mouse and the computer doesn’t register what you typed unless you press enter. Also, it’s very easy to start programming, so there’s instant gratification.

And you can use Nick Montfort, Patsy Baudoin, John Bell, Ian Bogost, Jeremy Douglass, Mark C. Marino, Michael Mateas, Casey Reas, Mark Sample, and Noah Vawter’s wonderful book 10 PRINT CHR$(205.5+RND(1)); : GOTO 10 (MIT Press 2012) which is also available open access as a free PDF. I assigned the first section of the book, which goes through that one line program step by step in a very enlightening manner. You could certainly ask students to read other sections of the book as well.

I’ve got worksheets all worked out so it’s a prepackaged two hour session. Feel free to borrow, steal or adapt. Here is the worksheet I give students as a PDF, and here it is in Word format, in case you want to edit it.

Before you start, install VICE (the Versatile Commodore Emulator), which you can download for almost any platform, or use a web-based Commodore 64 emulator like côdeazur’s Flash-based FC64.

Start the class off by talking a bit about early home computing, and show students this 1983 ad for the Commodore 64 to show them how programming was marketed as a really attractive aspect of home computers.

Once students have got their emulators fired up, explain that the C64 keyboard layout is more or less like a modern US keyboard, but when you press shift you get fancy symbols, so the characters shown on the screen won’t always match what your keyboard says. You can refer to these keyboard layout diagrams. Some students take quite a while to figure out the command line interface. The computer (well, emulator) won’t process what you type until you press enter at the end of a line. Using the arrow keys to go up and fix a typo won’t work unless you actually press enter for each line you changed. This is not a graphical interface.

Then I hand out worksheets and let students work their way through them. I walk around and help students who are having trouble with the command line interface.

OK, that’s all we really have time for in a 90 minute class session. If you come up with improvements or other ideas, I would love to hear about them – please post them in the comments!

Previous Post
Åpen dag på digital kultur
Next Post
Can you imagine that the world will change?