There’s a Jenny Holzer installation at the new Telenor building at Fornebu, a 30 kroner bus ride from Oslo, and on Saturday afternoon James and I went out to see it.

Running Letters consists of words that scroll from right to left across a band of red LEDs that stretches all the way along the top edge of one of the buildings, like a lace edging, or perhaps rather like the waistbands on some men’s underwear where the designers name is written repeatedly on the elastic. Words fly across this black and red band, more and more words, all the words Holzer’s ever published I suspect: her Truisms from the late seventies were there, her Inflammatory Essays, and just as we left we saw the beginning of Mother and Child. It’s done similarly to her installation at the Guggenheim a few years ago. 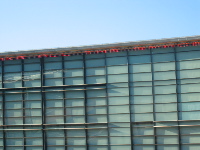 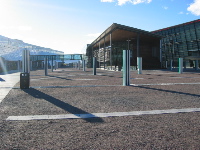 Many of the slogans are familiar to me. Maybe I’ve seen them before in books about Holzer, or perhaps they’ve been passed on from hand to hand for so long we’ve forgotten she coined them:

THE BEGINNING OF THE WAR WILL BE SECRET

Others surprise me by their playfulness:

Some are trite as the affirmations people buy in packs to stick on their bathroom mirrors, while others start with triteness but chill once read: 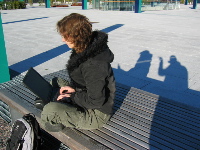 After walking through the space I sat on a bench and wrote while James photographed. I’m writing the introductory essay for a booklet Utsmykkingsfondet (the National Foundation for Art in Public Buildings) is publishing on electronic art in public spaces, and Holzer’s piece is one of the twenty that will be presented in the booklet. The other works don’t use words like hers does. Many are based on sound, some on video, some are generative. One of the works, Marius Watz’s Tegnemaskin 1-12, which I wrote about a couple of weeks ago, is in a digital electronic space, but the others are in physical public buildings and spaces: a train station in Oslo (Nydalen), a swimming pool in Trondheim, the new medical science building ten minutes walk from my house in Bergen. Many of the works respond to bypassers in some way, but very few respond in a way that passers by are likely to grasp and to some degree control. Holzer’s piece isn’t interactive at all, that’s not the point of it, its point, or one of its points, is that it’s constantly changing. The phrases and short essays are finite, but James and I were there for half an hour or maybe an hour without its repeating itself, and the words pass by so fast that you have to follow them carefully to read them before they’re gone. The band of moving red letters is partially obscured by a regular line of icicle-like taps of steel hanging down in front of them. If you click one of the photos above and look at the larger image, you’ll be able to see their shadows.

In an interview in Wired in 1994, Jenny Holzer said:

I’m always more at ease when something doesn’t actually exist. [Laughs] That’s my preference. I like things that are just electrical impulse and no more. Not necessarily neutral, but fleeting. (Wired interview, Feb 1994)

After ten minutes or so the sliding words stop. The LEDs go dark and James and I look at each other in surprise: surely they wouldn’t turn it off? They haven’t: a minute later, new words start to scroll across the long, long band. Later, reading one of James’s books about Holzer (he has several) I recognise the tiny almost-stories that come after the Truisms. They’re from Under a Rock, which was written and, uh, installed, I suppose might be the word, in 1986.

Holzer did a web project in 1997, Please Change Beliefs, where she uses the text of Truisms (aphorisms originally pasted all over Manhattan in the late 70s and since displayd on billboards, tickers, printed on condoms and so on) and lets users suggest changes or additions, though these are collected in a “submissions” category and don’t change the authorative truisms on the front page. There’s also a section that displays some of her Inflammatory Essays in ugly underlined red against changing backgrounds.

DON’T TALK DOWN TO ME. DON’T BE POLITE TO ME. DON’T TRY TO MAKE ME FEEL NICE. DON’T RELAX. I’LL CUT THE SMILE OFF YOUR FACE. YOU THINK I DON’T KNOW WHAT’S GOING ON. YOU THINK I’M AFRAID TO REACT. THE JOKE’S ON YOU. I’M BIDING MY TIME, LOOKING FOR THE SPOT. YOU THINK NO ONE CAN REACH YOU, NO ONE CAN HAVE WHAT YOU HAVE. I’VE BEEN PLANNING WHILE YOU’RE PLAYING. I’VE BEEN SAVING WHILE YOU’RE SPENDING. THE GAME IS ALMOST OVER SO IT’S TIME YOU ACKNOWLEDGE ME. DO YOU WANT TO FALL NOT EVER KNOWING WHO TOOK YOU?

I wanted to see Douglas Gordon’s piece too, which is also at Telenor and also going to be presented in the booklet on electronic art in public spaces, but it was indoors and under lock and key. From what I’ve gleaned, Gordon’s piece is a manipulated version of the 1953 John Ford film The Searchers where the time of the movie is stretched so it takes five years to view it, the same amount of time as the fictional story lasts. Strangely fascinating idea, isn’t it?

Thanks to James for the photos in this post.

8 thoughts on “jenny holzer at telenor”