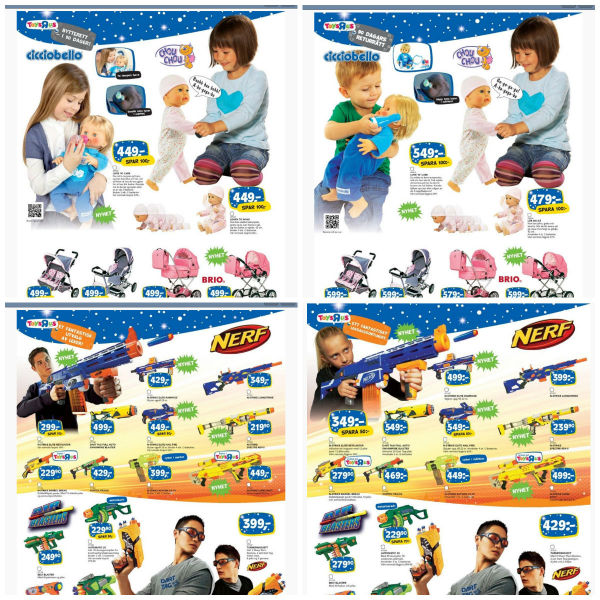 Children are constantly exposed to gender stereotypes, but as a parent, I would like to minimize that influence and allow them to stay as open as possible about what sort of person they would like to be. There are ways to make things better. One way is to complain when you see it happening. Another is to change what we can, at home.

Complaining can be very effective. One major area children are taught that they should fit into neat categories of pink and blue are toy shops. But this can change. Hamley’s toy shop in London stopped segregating toys – and kids – into separate floors for girls and boys after protests. This year, after massive complaints from parents, Swedish toy catalogues from Toys R Us and (the sister company of Norwegian BR leker) are more gender neutral than their counterparts in other countries. After reading an article about this that a friend shared on Facebook I checked out the Norwegian Toys R Us catalogue with the Swedish Toys R Us catalogue, and sure enough, there are some very significant differences. Guess which side is the Swedish one?

Bizarrely enough, the commenters on the article I read, which is Danish, were almost all shocked at the Swedes. How wrong, the commenters said, to force children into roles that aren’t natural for them. How wrong, I think, to make children think that boys don’t like dolls and girls mightn’t like, uh, nerf guns.

OK, I don’t like nerf guns. I’ll be happy if none of my kids ever want nerf guns. But I’d rather they assumed that nerf guns weren’t a specifically male territory.

Another way we can make our kids’ lives a little less pink vs blue is by simply hacking their toys and media. I’m sure I’m not the only parent who sometimes adjusts the words in a book when reading aloud to my kids. OK, often the adjustment is simply to shorten the book drastically when it’s bedtime, but I also always try to change the bits that assume boys and girls would have fundamentally different interests. For instance, I love Doctor Seuss (and even the corporation that makes board books and popup books loosely based on his rhymes) but I simply do not see why he (they) couldn’t simply have written

It rhymes just as well! Why assume boys wouldn’t want to brush and comb a beautiful, soft pet? Just to make sure that other readers will also know how the book is supposed to go, I’ve amended the text:

This dad did things a bit more elegantly, though, when he hacked Zelda to make Link a girl. Because why on earth shouldn’t his daughter be able to imagine herself as Link?

The dad does explain how to do this, but it’s a little more complicated than crossing out “girls” and writing in “kids”, although the basic idea is the same.

We need to hack this system more. Sometimes we can simply show our kids more of the variety in life. When our four-year-old insisted that men always only wear boring clothes and that they have to wear boring clothes I showed her and her little brother pictures of ancient kings and gentlemen in their furs and velvets and lace and frills and fancy hairdos. She was impressed, and has changed her mind. Other times we can change the language ourselves, whether in a book or a game. When we cannot, perhaps we can at least show them variety. After realising how horrible the 50s Disney version of Peter Pan is I made an effort to show my then six-year-old older daughter other versions, and to read the original, and to talk about how and why the 50s version is so horribly sexist.

And perhaps most importantly we can kick up a fuss and complain en masse, and maybe get toy shops – even in Norway – to change their catalogues so boys can play with dolls and girls with the toy tools.

Even better, maybe we could just get back to toys being toys. Not pink and blue.

Previous Post
Do we WANT to be able to predict an election result?
Next Post
PhD fellowship available on extremist discourse online – and open call as well