More people are killed by tourist brochures than by sharks 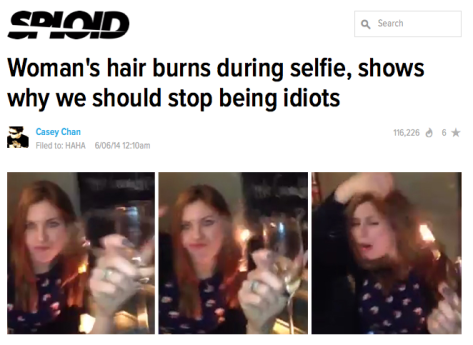 I study selfies, so that Mashable story has been all over my social media. You know, the one that says that More people have died from selfies than shark attacks this year.

A few weeks ago a student from my university died at Trolltunga, that astounding rock you see in the photo above. She wasn’t taking a selfie, but she was standing in line to have her photo taken. She fell 300 metres.

Why do you think she wanted to take that photo? Well, look at that tourist ad from Fjord Norway again: “If you want a lot of likes on Facebook you should go walking in a picture postcard.” Their website expands:

Several such places have become icons or collectibles. Your holiday pics of these motives will end up on a wall of some kind, either framed in glass above the mantelpiece, or receiving an avalanche of “likes” on your social media of choice.

Here’s another tourist ad for Trolltunga:

That image might give a visitor ideas, don’t you think? Here are the other photos in the image carousel:

If you actually read that Mashable story it says 12 people died from selfies so far this year. Eight people died from shark attacks. Those are global figures. Obviously, both forms of death are extremely rare.

And yet it’s not just my friends who are sharing the story: more than 82,4 k people have done so, Mashable tells me.

I think they share it because it so neatly confirms a prejudice. Selfies are stupid. We shouldn’t even just “hate the selfie,” we should “hate the selfie-taker,” as a PBS video states. Anne Burns finished her dissertation last year on how the ridiculing and hatred of selfies and selfie-takers is used to discipline certain people, and her analysis of the “hate the selfie” video on her excellent blog The Carceral Net: Photography, Feminism and Social Media’s Disciplinary Principle is worth reading.

Often, we blame selfies even when the photo clearly wasn’t a selfie, as in this headline, where, as Anne Burns points out in her analysis, clearly somebody else is photographing the woman whose hair caught fire. (If you want more, read Anne’s scholarly essay “Self(ie)-Discipline: Social Regulation as Enacted Through the Discussion of Photographic Practice”)

By connecting connecting selfie deaths to shark attacks, Mashable adds ridicule to the tragedies of these deaths, and as we know, ridicule is an extremely effective form of discipline that is very frequently used on people who take selfies.

Not all selfie deaths relate to crazy photos on clifftops, and not all deaths on clifftops have anything to do with selfies.

But I am sure that part of the reason that people want to take crazy photos on clifftops, whether a selfie or a photo taken by someone else, is that tourist offices market them.

This is not simply about selfies.

Previous Post
To look into a refugee’s eyes
Next Post
Zombies, Corpses and Fetuses: my talk at #IR16