Nick Montfort linked to a rather wonderful new piece that poet William Gillespie (of The Unknown fame and publisher and author at Spineless Books) read from yesterday at the &Now festival: MORPHEUS 11, the story of a poet sent to Alpha Centauri to test a nuclear bomb that can destroy a plant, who returns to Earth to discover that Earth has a ring instead of a moon and that there is – perhaps – no longer life there. 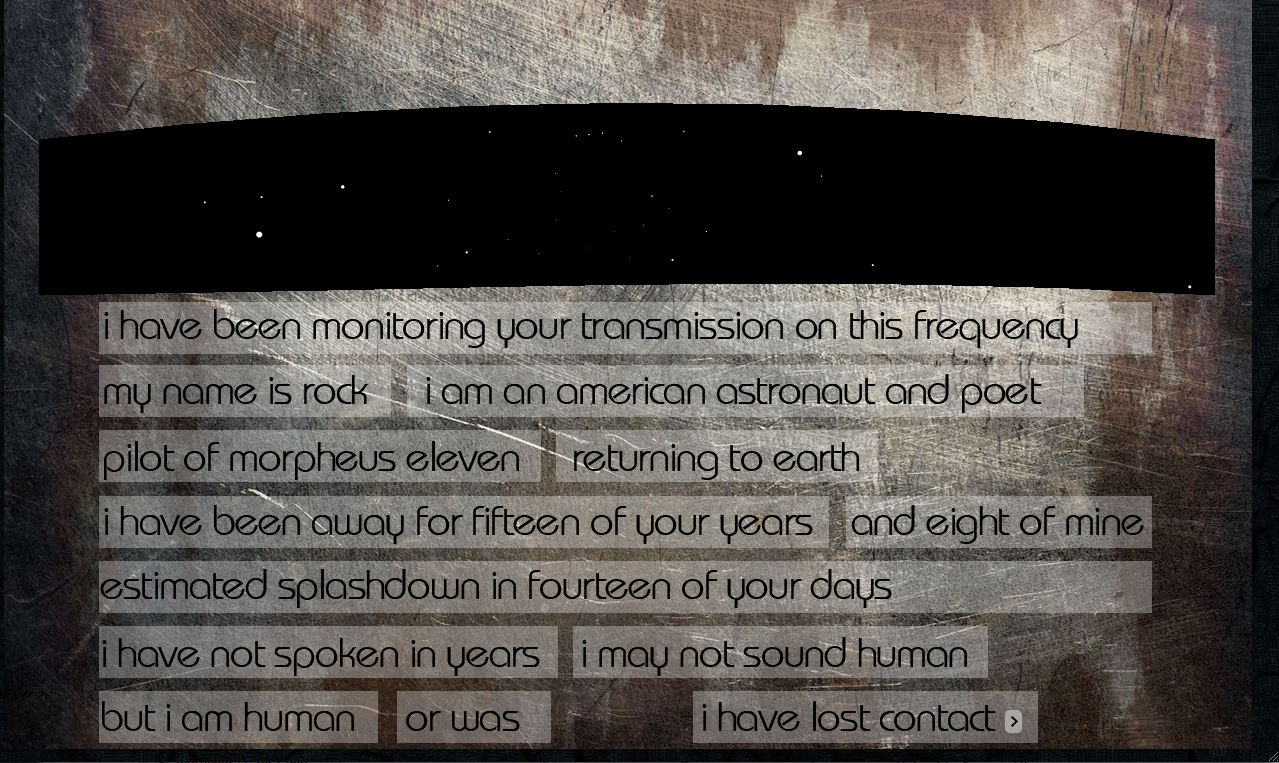 The story is told linearly and lasts for about 20 minutes, with no opportunity to pause or rewind – it’s worth watching in a single setting though, both for the story itself and for the grungy space visuals created by Travis Alber: a scratched metal background with a window through which to watch the stars passing by, and dream images superimposed on or maybe reflected in the dull, stained metal. 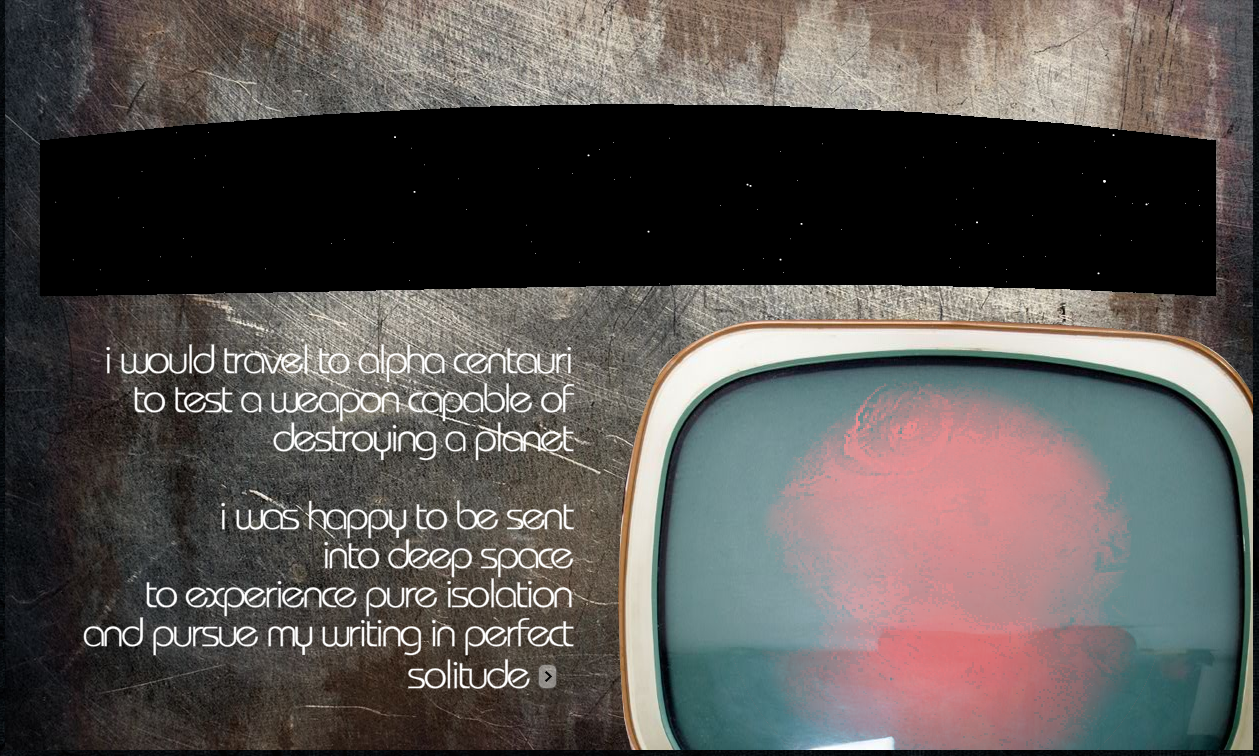 Eerie music (composed by David Schmudde) supports the words and images. Some of the words pass by as fast as you can read them, while others wait patiently until you click the arrow leading onwards. But you’re always led onwards, and while at first this insistent linearity annoyed me, after a while I sat back and relaxed into it, accepting my temporary and voluntary capitivity as having a certain symmetry to the narrator’s – although my clock was a lot faster than that on his spaceship or that spinning round representign the Earth’s time. 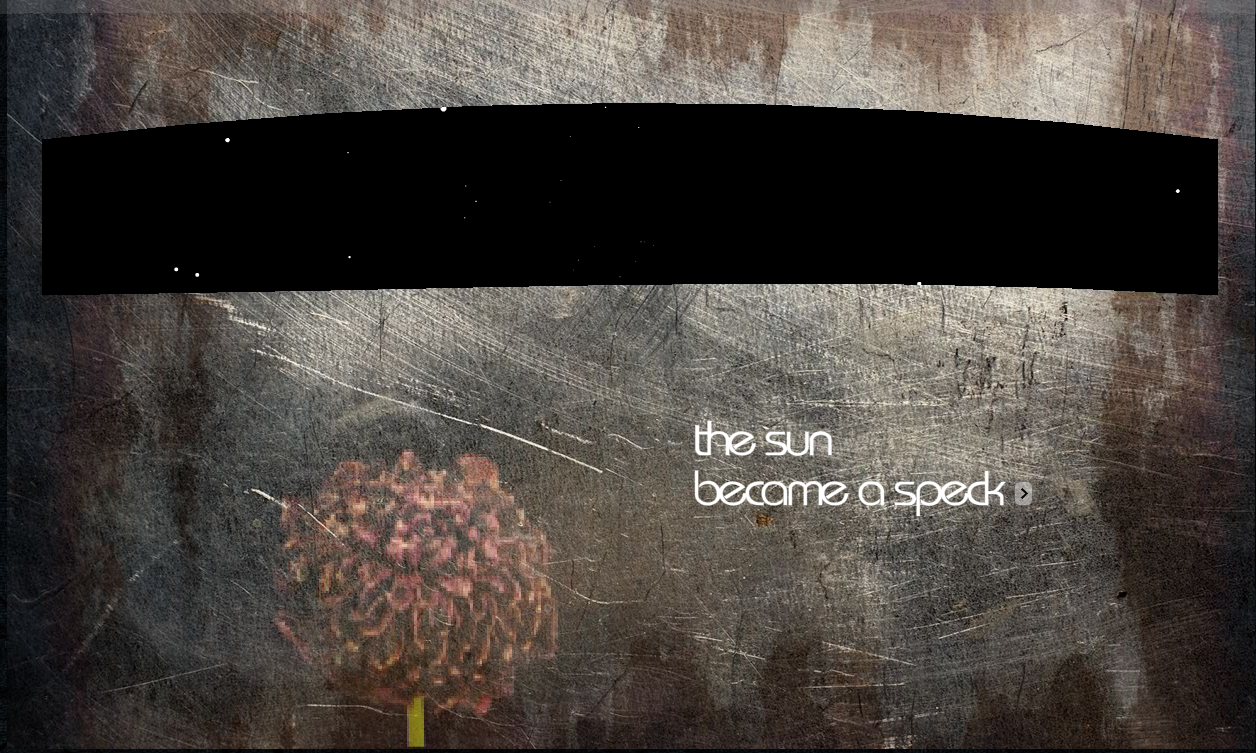 The plot of the story reads a little like an echo of science fiction tales I imagine I have read before – the lonely astronaut, the world that destroys itself (over and over in fiction) but the telling is more poetic than a political commentary – America declares war on China, but no reason is given, other than the political situation being increasingly difficult. The true story is perhaps not the political allegory that characterises so much science fiction, but that of the disconnect between astronaut and earth. He looked forward to the mission, looked forward to being alone, to reading vastly and to writing poems. At first communications work well and he sends a poem to Earth every week. But as he is further and further away, contact with Earth becomes increasingly asynchronous. His wife divorces him. He dreams of a red haired woman, but later, in dreams, her son attacks his son, and he contributes to her death. And on returning to Earth, it is empty, completely changed. Even Plato’s works (on his electronic reader) have changed. There is nothing to return to.

Despite the final throbbing question left hanging in the air (until the reader decides there’s probably no more and closes the browser window) there’s more beauty than sadness to this piece. The idea that a poet would be the one sent (willingly) to explode a far-off planet leaves me smiling (bizarrely) and thinking that I might have to watch this piece again.

Definitely worth its twenty minutes.

Previous Post
wikipedia academy talk
Next Post
is virus of the mind an acceptable source in an academic essay?