I spent the afternoon at the Steamwheedle Faire, a big role-playing event on our World of Warcraft server that I’d really been looking forward too. I’d got a dress for my troll warrior, to make her look festive rather than warlike, since the Faire was a cross-faction event, and in our guild we’d discussed how we’d role-play the event. But when I actually got there, I was overwhelmed, and found myself less participatory than I’d imagined and more interested in how such an event shows what doesn’t work in World of Warcraft. I think the main problem is that the interface is not at all optimised for role-playing. The visual and gestural interface works well for fighting and exploring, but is very limited for interpersonal communication other than attacking each other. With huge numbers of people present – there must have been more than a hundred – the visuals become close to useless, and you rely almost solely on the text chat for figuring out what’s going on.

World of Warcraft uses basic commands similarly to MUDs and MOOs, so I can type “/say I’m so excited” and other players near me will see the text “Zarastra says “I’m so excited” in chat window and a talk bubble over my head with the words I just said. (That’s a made up character name, I don’t think I want my troll too easily connected to her player.) In a text-only world this works quite well. Either you’re in the room or you’re not, and so /say can work even if there are a lot of people present. In a graphical world, though, proximity matters. I want to stand next to my friends, and I want to remark on how people look or on what they’re doing. At the Faire, everyone lined up for drinks and raffle tickets. I saw a friend from the guild, and so I tried to talk to him – but since the chat window was rolling past so fast with all the conversation, he didn’t notice, or if he did, he didn’t connect my “hi” in text chat with my being right next to him. He couldn’t see the talk bubble over my head because I was just behind him in the line. Roleplaying is supposed to happen in /say and in emotes like /wave or /me taps Nalia on the shoulder, but those things weren’t working because there were too many of us. Add in the lag I was getting as my computer struggled to render a hundred odd humans and dwarves and trolls and it was quite a frustrating experience.

What also worked well were events that play to the visual. The Mithril Guard had a parade, which looked great – a bunch of dwarves wearing blue all in very strict formation. We couldn’t understand them though, and when they seemed to stop very abruptly, just dispersing without taking a bow (you can bow in WoW) we wondered whether we’d offended them somehow, or what had happened. The lining up was sort of confusing but looked good from a distance. There’s also a certain pleasure in the fireworks and dancing. 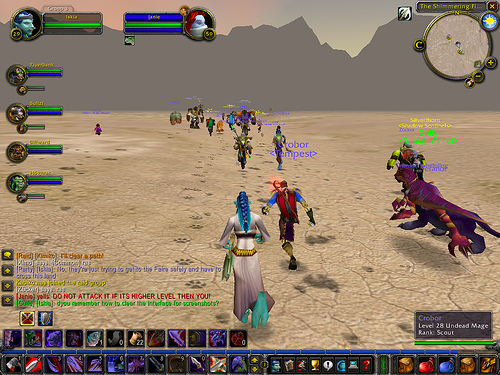 What I enjoyed most, though, was crossing the high level zones in a huge long procession escorted by high level guild masters. I think this worked so well because this is one of the things the interface is designed for: exploring and moving around a varied landscape. We were running along so there was no real need for much conversation. And we were doing something together, with excitement. Looking forward to the event was great fun too. It was a good excuse for talking with other players (“Are you going to the Faire next Sunday?”), and having decided I needed a dress to wear to the Faire gave me nice little self-motivated “quest”.

I love that people organise events like this – Stomina Teacup, the guildmistress of Kaboom! Inc, a gnome guild, is the main mastermind, and along with The Mithril Guard, Kaboom is clearly the most active roleplaying guild on the server. At any rate, they organise most events. Hopefully, in time, we’ll have graphical interfaces where communication and role-playing are as well-supported as fighting and exploring.

[Edit: Esther also posted about the Faire, with some really thoughtful points on roleplaying in WoW.]

3 thoughts on “off to Steamwheedle Faire”