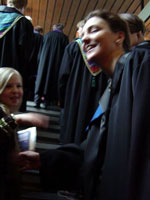 It still isn’t easy for women to remain in academia: only 13% of full professors are women. That number hasn’t increased a lot in the last decade, despite the female-friendly Norweigan rules that award full professorships based on merit rather than available positions, and despite the growing numbers of women taking doctoral degrees.

After the ceremony the university newsletter journalist snapped photos of me and my daughter, as we were sitting chummily discussing how best to manoeuvre drinks and foods at a reception. I wish I’d been better able to answer her questions about how to get more female professors. Today I wrote her an email, telling her how much it meant to me that the rektor of the university patted my shoulder and smiled. Men have given me amazing support, don’t get me wrong. Without Espen‘s belief in me and his steadfast pushing me into situations I didn’t realise I could master I doubt I’d have realised I could start a PhD, let alone finish one so successfully. But I think rektor‘s pat on the shoulder was the very first time I’ve experienced motherly support in the university. And I really liked it.

When I have thirty years more experience than I have today, I’m going to be a motherly, encouraging professor. I’m going to encourage young women and men to succeed and I’ll smile to them when they do as though I’ve watched them grow up and share their parents’ pride in them.