tweeting vs blogging – and the prompts of social network sites

Twitter is so easy that I keep feeding my quick finds into tweets (I’m @jilltxt on Twitter) instead of writing something more about them for the blog – which is fun and fast, and gets quick and interesting responses, but doesn’t lead to the steadier, more long-term thinking and conversations that I enjoy on blogs. And of course, as Nick Montfort (who just made associate professor and got tenured at MIT: congrats!) pointed out to me last night, Twitter is

I find that Twitter makes me much more geographically located than blogging. Because Twitter is so immediate it’s much more reliant on time. I tweet mostly during office hours here in Norway, and so if you live in New York or California you’re still asleep when I’m tweeting. If you live in Singapore or Australia you’re likely having dinner, putting the kids to bed or out having a drink. So my conversations are with Norwegians and to some extent with Europeans. I do like being more “present” in Norway but I miss the connections with the rest of world. Because blogging is slower, and because archives and links are more important, geography and time zones matter far less – in fact I’ve never really felt that they matter at all. If anything, I enjoy waking up and seeing that other bloggers have been writing while I slept. On Twitter, I’m unlikely to ever see those tweets – I’d have to individually go through their archives, which is a painful process, and unlikely to happen since there’s always so much happening in the live feed.

Twitter does have an open API and it’s probably through all the external services the really interesting things will happen. Of course there are so many of these that it’s hard to keep track! Yesterday’s Norwegian one was Tvitre.no, which ranks Norwegian Twitter users according to location, followers and categories. The day before the rage was the #selvtwitterangivelse” where Norwegian users tagged themselves and it was compiled into a tag cloud of Norwegian Twitter users.

The fast conversations can be frustrating – your comments disappear so fast, and if you answer too late because it was nighttime when the conversation was going on, you’re really not participating. But because the investment on each individual tweet is so low, you really do get some fast answers and useful responses from interesting people. For instance, last night I was writing about phatic communication in social media and I used the prompts in Facebook and Twitter as examples.

Facebook asks “What’s on your mind” now and I was flaking on what they used to ask – I knew it was different before the latest redesign. So I asked Twitter. 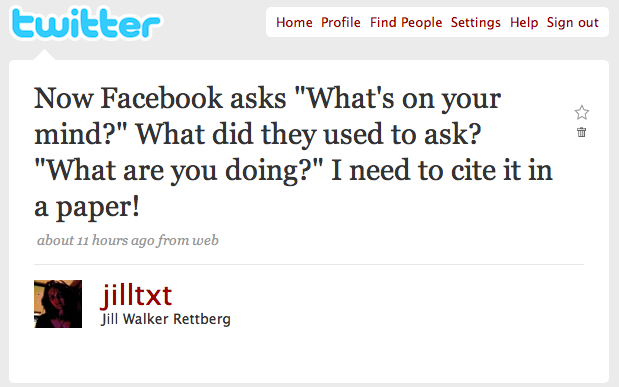 Now that was kind of a lazy question, really – I actually found the answer myself by searching for old screenshots: it’s “What are you doing right now?”. But in addition to the kind straight forward answers I also received a more interesting answer, about the difference between Facebook’s prompt and Twitter’s prompt. 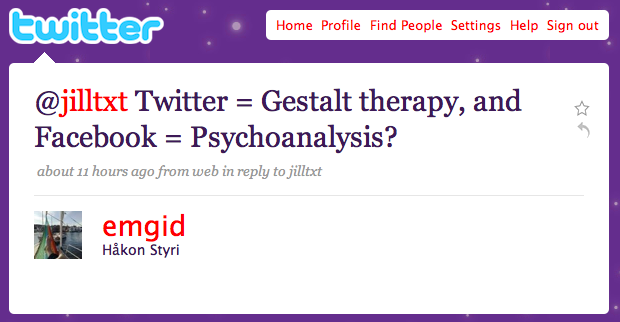 Oddly enough, Facebook’s new prompt is closer to the way most people (or most people I follow) seem to actually use Twitter. Here’s the prompt and the little box you type into at Twitter:

I know nothing about gestalt therapy vs psychoanalysis, but the difference between prompts is interesting. It says a lot about what the site’s creators are looking for – what they think we want to do online, what they want us to do with their site. The “What are you doing” prompts encourage all those “boring” things people complain about Twitter and blogs doing: the sandwich you had for lunch, what your cat’s doing, and so on. This is what parodies tend to play on. “What’s on your mind?” is a somewhat more sophisticated question. And at the same time as Facebook switched their prompt they removed the automated “is”, so you now have to type in “is doing something” to make your status message read “Jill Walker Rettberg is doing something.” That allows for different ways of using the status line.

But common to all these prompts is the way they prioritise the phatic function of language. Roman Jakobsen wrote about that decades ago: only one of the several functions of language is to communicate information, and that’s not even really the most important way we use language. The phatic function of language is about confirming connection. What we’re really saying when we answer these prompts is, more or less, this, according to anthropologist Grant McCracken:

Our use of mobile phones, for instance, is very often phatic – “Hey, how are you doing?” “What are you up to?” A lot of text messages and so on are mostly saying “I’m thinking of you.”

So Twitter and Facebook are not just about sharing information – they’re about connections. Being part of a community, and being aware of it.

Do you know about other prompt questions asked by other social network sites or other communication/publication platforms that would be interesting to compare? Perhaps someone should write a whole paper about writing prompts in communication templates. I bet there are even pre-digital examples – baby journals are prime examples of prompted writing of course, and even diaries come with implicit prompts. I’m not sure whether examples exist of pre-digital prompted writing that’s primarily communicative rather than archival, like a diary, though?